There were two groups setting out from the market place. Andy Bain’s group went to Flash Bar while the main group set out for Hayfield. There were nine riders in the main group and most claimed to know the route so we set out via Mill Street and Abbey Green before reaching Meerbrook where it became apparant that in fact, most riders had no idea of where we were going so ride leader Shaun M turned to his Garmin for advice and so we carried on to Wincle and in to the Goyt Valley before reaching Kettleshulme where we had a fast paced descent in to Whaley Bridge. Here we decided to head to the Bridge Cafe instead of Hayfield so we were soon enjoying coffee and large slices of cake.
It was decided to head back via Long Hill so there was quite a competiton to see if we could beat twenty minutes to the top but as we faced a headwind all the way, this was quite an ask. Shaun and Rob B and  Steve W were leading the peleton up the climb and only just missed the target so good effort guys. We dropped back down in to the Goyt and up to Derbyshire Bridge where we were treated to the sight of the mighty “Two Sauces Simcock” throwing down his bike and lying flat on the floor due to leg cramp. At this point, the group took a few steps back away from him before declaring it safe to continue, you had us worried there Phil! We rode up to the Cat And Fiddle road and turned on to the A54 to head back to Algreave and Gradbach before riding along the Back Of The Roaches and in to Meerbrook. On the descent we were shocked to see a cow and bull by the side of the road so we did not hang around there! We headed back through Abbey Green and back in to Leek at 2.15pm after a fifty mile ride. Thanks to Shaun M for taking over navigation.
Nick A 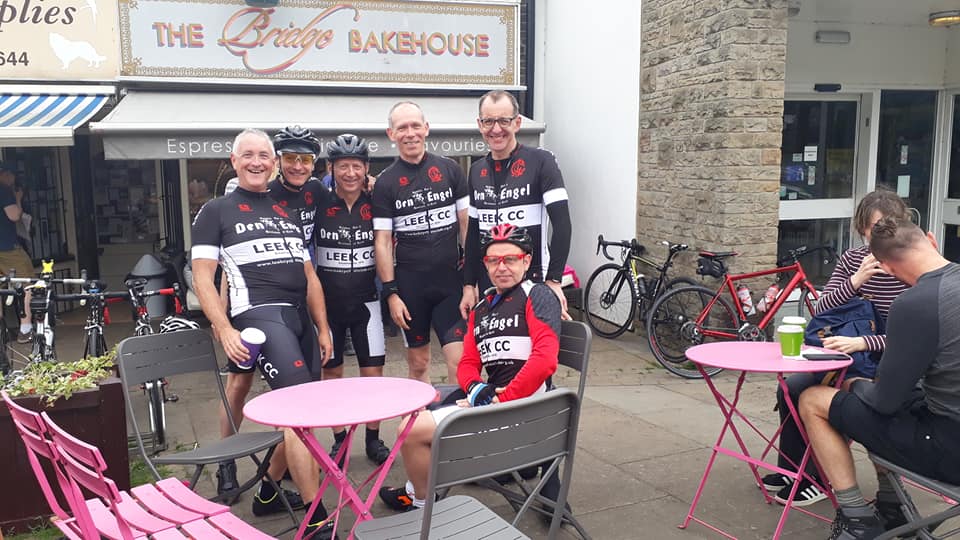