Two groups set out for Hackwood Farm riding out along Ashbourne Road but at Bottom House the A and B groups split so we carried on with thirteen riders via Ipstones Edge and in to Ramshorn and Ellastone and Cubley. At Longlane, we encountered what seemed to be the entire contents of a local quarry scattered across the road so it was a struggle to avoid the chippings. We pulled off to take a short cut to Hackwood and were soon at the cafe and sitting out in the warm for once. A group picture was taken along with a Leek so one for next years callender!
We returned via Sutton On The Hill at a fast pace which left me well behind. We continued to Marston Montgomery and Rocester before riding in to Denstone and Alton and along Red Road to Oakamoor and the sharp climb out of the valley. We turned off to head to Kingsley and I was so beyond hitting the wall, I was down to the footings by this point. I should have pleaded to be allowed in to the Woodhouse Autism centre! Near to Kingsley, we came across a young lady rider with a front brake fault so Dave M pulled over to help and the group helped shelter her from the traffic until we passed her home, well done Dave! We carried on to Cheddleton where we dropped off Dave M and Rich C, I continued alone back to Leek while the group had a chat before they returned to Leek at 3.30pm after a tough sixty eight mile ride. It was a long one due to two punctures and waiting for me to catch up, sorry guys!
Nick A 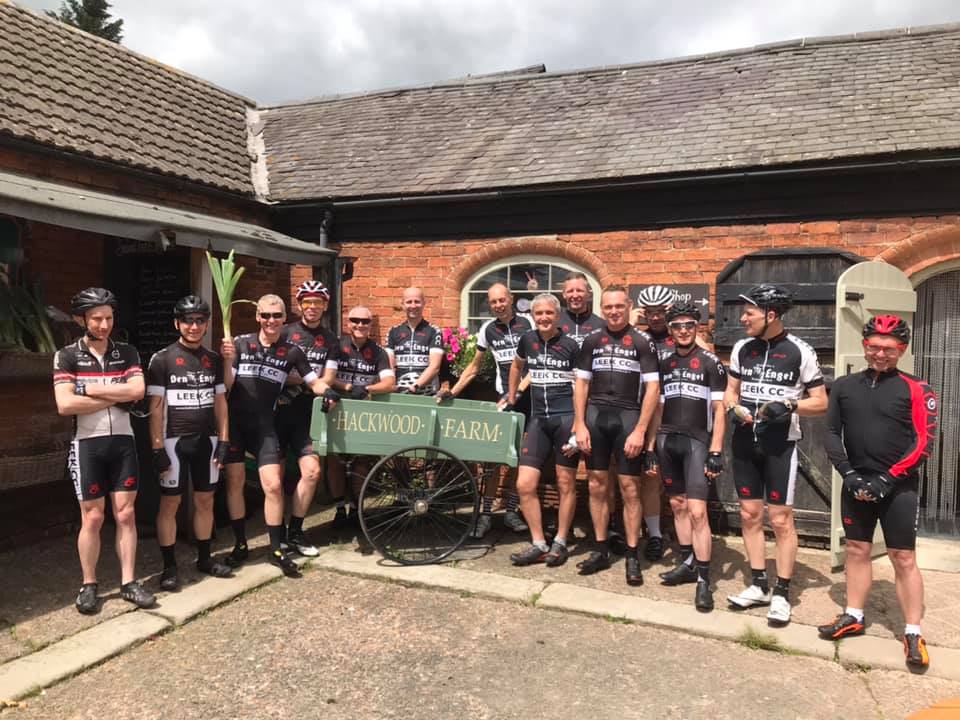